You are here: Home / Uncategorized / Evolution of the cover image

From the beginning, I had an idea of what I wanted the cover to look like. The Boy Who Ran contains light allegorical content, related to what has recently been learned about the spiritual beliefs of the people living in the mid-archaic period. I note this on my web site in the section which discusses History and The Boy Who Ran.  I used these concepts when writing the book—there is more to the Boy / White Flank relationship than I reveal in the book—and I wanted to capture the idea in the cover image.  I discussed this in detail with my long-time close friend Paola when I was in Italy. Like myself, her training is as a physicist, but she also has an excellent eye for how to relate things in an artistic way and the talent to create what I was envisioning, although less crisply than she could.  She agreed to draw what I described and submitted more than one candidate sketch before I saw that she had settled on a perfect idea of what I wanted.

I’m attaching a series of pictures as that chosen sketch turned into the cover of the book. 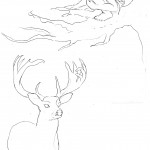 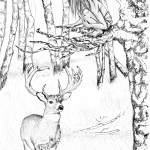 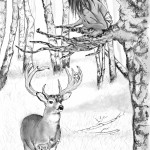 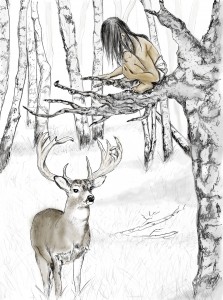 Jamie at Belle Etoile added the green color and then wrapped the image around the book a bit. Later, after winning the IPPY medal, she added the badge for me. 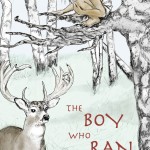