I took this picture from my home office window a few days ago.(July 16th 2014 or so) Woodland Park is called The City Above the Clouds. The largest mountain is Pike's Peak, as seen from the north. I thought that the view from this house, plus the environment of being in a national forest, was conducive for writing.

Michael Selden has lived all around the world and  has been an eyewitness to numerous historical events such as the building of the Berlin Wall. His father was a non-commissioned officer in the United States Air Force.  Mike was graduated from St. Mary's High School, Colorado Springs Colorado and later studied physics at the University of Florida, Gainesville, and attended graduate school at Johns Hopkins Univ. Baltimore.

He has worked as a research physicist, program manager, and principal investigator on numerous scientific and engineering efforts during his career.  First, he developed technologies and techniques that helped expand our understanding of the earth and the earth-moon system and to validate the relativity principle of equivalence.

Besides his work in physics and the publications in technical journals, he has always had a keen interest in literature, particularly fiction, and he began writing short stories when he was twelve years old.

Having achieved the goals he set for himself in science and technology, Michael retired from his first career to pursue his other passion, writing, turning what had been a life-long avocation into a full-time pursuit.

In July 2013, Michael moved from Baltimore, Maryland to Woodland Park, Colorado, returning to the region where he went to high school, to write and publish books.

When he is not writing, reading or staying abreast of the latest developments in the world of physics, he likes to travel and hike, cook, ride motorcycles, and meet up with friends. He is learning how to fly-fish.

"For me it's not about the fish—I don't care if I catch anything. It's catch and release anyway, and I don't use barbed hooks. I enjoy walking in the river in my waders and trying to be as accurate as I can with the casts, and I think about almost anything else while I'm doing it."

I'd love to hear from you. I can be reached at

Thank you for your interest in my work.

Photo Library 2 Other Photos from the Past andPresent (Link)

While attending the Univ. of Florida (where I almost became a career student), I also worked for 2 years in a restaurant / bar. This snapshot was taken with some of the gang from that restaurant—I think we went out bowling that night, but I'm not sure. 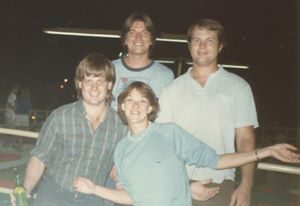 With Mike Stillwell (left), Steve Biemiller (top-center), Michael Selden (right), and Megan, who went by Mega, and whose last name escapes my memory as I write this.

Where Michael can be found:

Being an Independent Publisher

In 2013 I formed a small publishing company called Woodland Park Press LLC. I'd been told (while still in Baltimore) that a publisher was interested in what will be my second book (The Balance), but that I needed to cut it down to 90 thousand words, or less, since it was a Young Adult fiction. At the time I'd already reduced its word count from 150 thousand to 135 thousand (still very big). I knew it was too long, but couldn't see a way to cut that much out without stealing the very soul of the book.  So I made a decision: I would publish it myself, even if I never sold anything. But getting started in publishing is a fairly daunting task, so I decided to publish the second book I'd written first: The Boy Who Ran. This is a Middle Grade novel, about the length of a novella for adults. I though it would be easier to learn the whole process of going through editing, design, proofreading, and publishing with a shorter work (just under 39 thousand words). The 'Boy' is a kind of niche book—not really a mainstream story. It would be hard to get a lot of readers, but trying to market this misfit story might let me learn even more.

I finally published The Boy Who Ran in November 2013, just before going to Italy to research what will eventually be my 5th or 6th book (after I finish writing it) and to visit friends. Publishing and marketing the 'Boy' was much harder than I thought. I know more now, but am still on a steep learning curve. I formed business relationships with editors and designers, with whom  I collaborate. These are the same people who either work for the big 5 publishers or do work for them as independent consultant on contract. I've also interacted with book bloggers and other authors, as well as companies like Amazon and Ingram.

The writing of books and the marketing of books are two very different activities, but the business of publishing has changed, and is still changing. Authors, even with the big 5, are responsible for the marketing now—its much easier with the big guys, since they can open doors for you and they also fund advertising and help you, but it's still work. If you are the publisher, too, then it's all up to you. Not only that, but it's very hard to draw attention to your book(s), and many people don't take you seriously, since there have been  author-publishers who haven't taken the work seriously. Independent and small publishers are often painted with a wide brush. Still, I can't complain. I get to do what I want.

I entered The Boy in two competitions and then forgot about them. These were a part of my marketing activities, and the IPPY is actually a very big competition, with thousands of entries. I was shocked to win a gold medal in the IPPY and a bronze in the Moonbeam Children's competition. There's no money involved and it doesn't really make your book a success, but it's a nice way of validating your efforts.

If you're looking for money, don't try to be an author—your chances of making a lot of money (or any money at all) seem to be about as good as buying lottery tickets. There are 1 or 2 million books published every year right now, and only a handful make a lot of money. Only about 1% of them sell even 1000 copies, and (for the Boy) just breaking even would take 10-times than many (mostly because of advertising costs). As of the writing of this note, The Boy Who Ran has sold somewhere around 500 copies. Thankfully, I do this because it's what I want to do and I don't need it to live. I've had good reviews and some nice notes from readers—which I always appreciate.

The inscription below is in honor of John Selden, a distant relation who lived from  (1584 - 1654). He was a great scholar and stood up for what he thought was right. He was sent to the Tower of London as a prisoner on two occasions for upholding his convictions.  The inscription he put in all of his books became the family motto, and it has always been an idea close to my own heart.

"Liberty Above All Things"